How to make a Stylish Slipcover out of a Shower Curtain, part 1

I have this black leather-covered ottoman in my bedroom that drives me crazy. I really hate the color of it but I can't paint it, no. I also just redecorated the bathroom so I was left with this brown shower curtain. I put two and two together and wondered - is there enough fabric there to make a slipcover for the ottoman?

So, here is the ottoman in question: 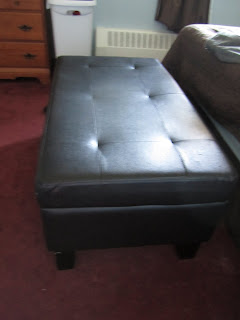 I draped the shower curtain over the ottoman like so: 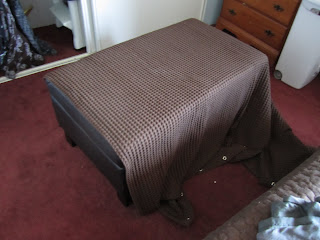 And found that I had a lot of extra fabric. So, then I started taking measurements and figuring out the logistics of this: will I cut it into five pieces, that is, one top piece, two on the width and two on the sides? I had enough fabric to make one long cover with two side pieces so that is what I did. 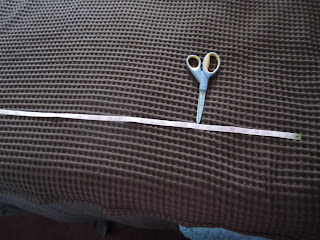 I was lucky. The basketweave texture of the shower curtain made cutting a straight line very easy. I then took a measurement on the other side as I had a lot of extra fabric hanging over one side. I wanted one long piece and two smaller side pieces so I measured how long the top of the ottoman was and cut the shower curtain. For me, it was 42 inches. 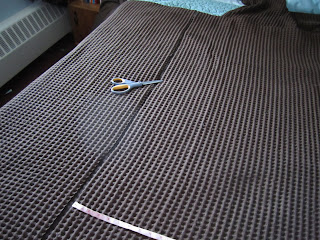 Now, I have a long top piece that was 54 inches by 42 inches. It covers the entire top from end to end with 1 inch of seam allowance on both sides. Now, I have to cut the two side pieces to complete the slipcover. I have enough fabric from the side of the shower curtain (on the left hand side in the above picture). I took a measurement on the side of the ottoman, width wise. I had 24 inches so I cut out two pieces of the leftover fabric: 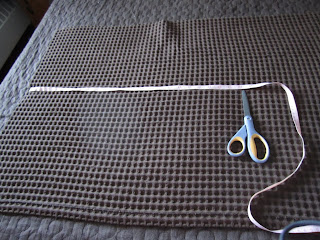 Lastly, I measured the side of the ottoman, from the top to the floor. This was 17 inches so I made one more cut on the two pieces at 18 inches (1 inch seam allowance). Now, I have arrived at three pieces for this slipcover: 1 long piece and two side pieces. I also have all of this leftover fabric which will most likely become a pillow or two: 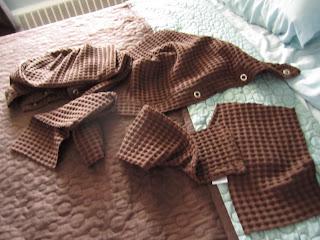 Part 2 will note the construction!

Estimated time for part 1 of this project: 20 minutes to measure and cut out the pieces.