I have a knit sweater that looks completely awful on me because it bags out on the sides and in the back. I also wanted to make it a short-sleeve sweater. For this project, you will need a sewing machine, pins, scissors, matching thread, a seam ripper and a dressmaker's pen. 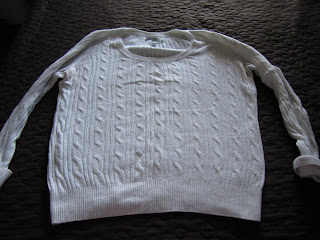 I tried the sweater on and pulled at the sides to see how much I needed to take in on either side. I want for it to be even so I took one inch on both sides and marked it with a dressmaker's pen. I took the sweater off, turned it inside out and started to pin where I had marked. This is pinning on the inside and I followed the natural lines of the cables on the sweater to keep it even. I pinned from the bottom all the way to the end of the sleeve. 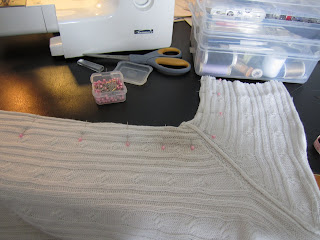 Then, simply, I sewed on the line of the sweater to take it in with matching thread, backstitching where I started and ended, and also on the armpit. I did the same to the other side, taking it in the same amount then sewing down. 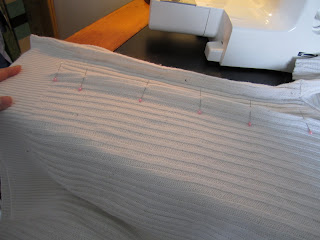 I pinned the tucks like so and then sewed each of them down.

Next, i looked at the sleeves. I wanted to make this a short-sleeve sweater so when I tried the sweater on, I marked where the sweater hit my elbow and marked it with a dressmaker's pen. 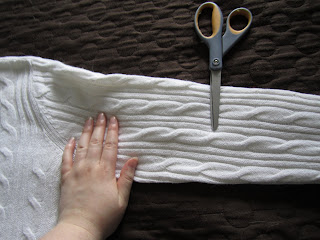 I folded the sweater at the chest so that I had the two sleeves facing me. I made sure that the shoulder seams lined up properly then I cut the sleeves evenly where I had marked.

I then did a zigzag stitch around the cut edges of each sleeve to keep it from unravelling (this made the edge rather frilly but no one would see it): 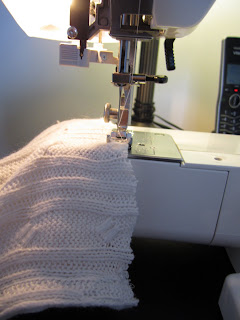 I then pinned the sleeve under about 1 cm and pinned it into place. I sewed it down, again with the zigzag stitch. 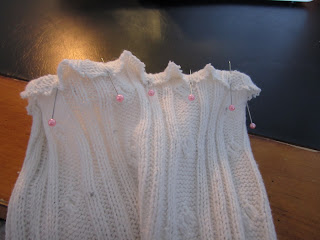 I did the same to the second sleeve as well.

This is the end result! 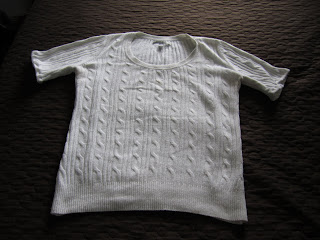 And it fits so much better now!

Estimated time for this project: about 40 minutes. This was mostly in the measurements and the pinning.