After years of searching for something my style in stores around Xmas time, I decided to make my own decorations. My Xmas style is rustic, woodsy and natural so I wanted decorations that reflected that without looking plastic or fake. 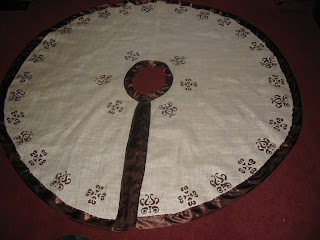 For this project, I had 3 yards of cream-colored burlap fabric, 3 yards brown polyester fabric (for lining the bottom), 3-4 yards brown blanket satin ribbon and matching brown and cream-colored thread. For the stenciling, I used 1 bottle chocolate-brown colored fabric paint, 1 plastic stencil with a pattern that I liked, 1 stipple stencil brush, masking tape, newspaper and a small container for holding paint. Also used was a dressmakers pen, measuring tape, scrap yarn, scissors, seam ripper and an iron.

Cutting out the burlap

To start, I laid the burlap out on an ironing table and ironed it flat so that I could cut it properly. I did not have a pattern so I cut out two halves the old fashion way: with a dressmaker's pen and a string. I laid the cream burlap fabric out on the floor and smoothed it out completely. I measured the height of my fabric (mine was 40 inches). I took my dressmakers pen and tied a 32 inch piece of scrap yarn to it.

My husband held the end of the string as I pulled the pen towards the cut end of the burlap. I got as close as I could to the edge and marked it with the pen. He held the string at what was now the centre (I marked that too) and I pulled the string in a half circle, marking the fabric as I went all the way around until I had reached the other edge.

Lay sheets of newspaper out on the floor (or a crafting surface if you have one large enough). I added masking tape to the top and bottom of each stencil to hold it into place. I used the same stencils as my burlap garland and in the same order so that they matched. I placed the first plastic stencil on the fabric about 1.5 inches from the edge. I followed the curve of the fabric then painted the stencil with the brown paint. I stenciled both halves of the burlap fabric along the bottom edge and along the center like so: 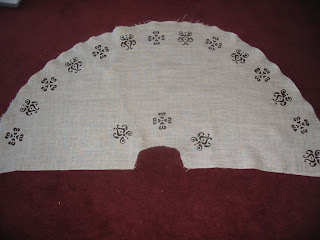 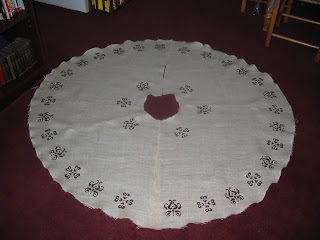 Now that the stencil was done and dried, I started the sewing. First, I sewed the two halves of the burlap fabric together on one edge only (the other side is not sewn together so that it can fit around the base of a Christmas tree). Once the two halves are sewn together, I took the entire piece and did a zigzag stitch along the edges on the outside to secure the cut burlap edges in matching cream thread. If you have a serger, that will work better.

Next, I sewed two halves of the brown lining fabric together in the same way so that it matched the cream burlap top. I pinned the burlap, with the stencil up, to the brown lining fabric along the edges and sewed the two pieces together. I now have a Christmas tree skirt that is stenciled burlap on the top and when it is flipped over, it is brown.

The last step is to line the Christmas tree skirt with ribbon. I used a brown satin blanket ribbon which I pinned around the circular edge, up the edges that were not sewn together and around the center. I sewed the ribbon to the skirt with brown thread. 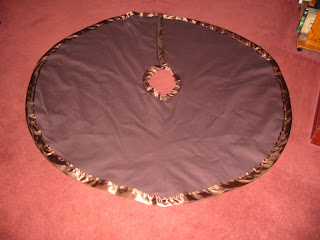 Estimated time for this project: 3 evenings at 3 hours each. I did the measuring and cutting one night, the stenciling, then the sewing. It does take time but the results are so worth it.